The Trusted Source for Name Information since 1996

The Best and Worst Celebrity Baby Names of 2018

The Best and Worst Celebrity Baby Names of 2018 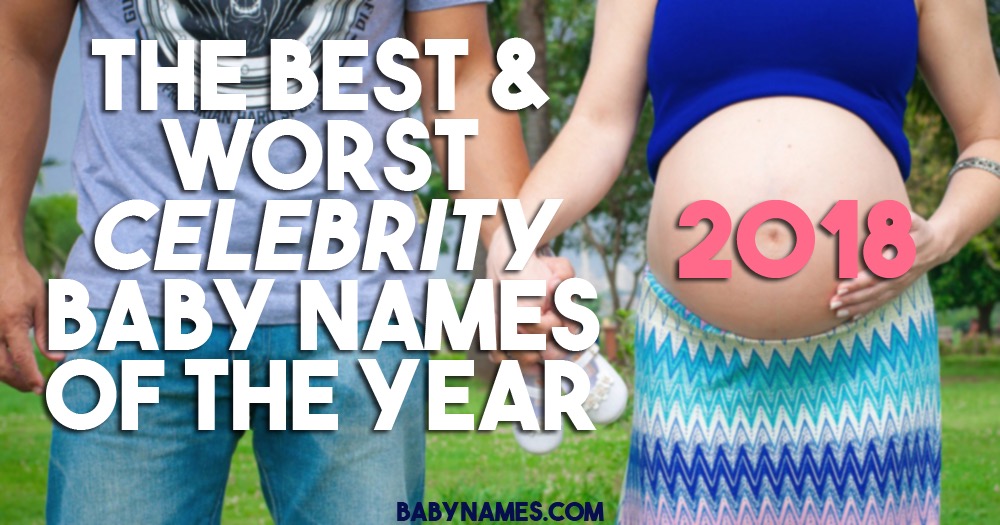 Well, it’s that time of year again. Sisters Jennifer Moss and Mallory Moss Katz, founders of BabyNames.com and co-hosts of The Baby Names Podcast, review the best and the worst celebrity baby names of 2018. Follow us through the year, as we weather the storm of the good, the bad, and the ugly. Not the babies, mind you, just their names!

M: Sorry to say that Hilary Duff and Matthew Koma’s daughter just squeaked in on this one. Banks Violet Bair is not to my liking, primarily because I don’t like Banks for a girl – or for a boy, for that matter!

J: I agree, it reminds me of Bailey Banks & Biddle an old jewelry store brand. Or a cartoon character: Banks Bear!

M: Geo Levine is the daughter of singer/songwriter Adam Levine and Behati Prinsloo. I would have much preferred Georgia Grace and calling her Geo for short.

J: Geo is not so bad, but to me it feels more like a boy’s name to me. I guess because it’s so similar to Theo, Neo, and Leo! A great alternative would’ve been Gia.

M: Baby, baby, wherefore art thou, baby? Yep, Romeo is one of my of least favorite names. Alec and Hilaria Baldwin named their baby Romeo without a Juliet in sight. We think naming a baby Romeo is putting expectations on him like he will be a little lothario. Why do that to a little tyke?

J: We agree again! Romeo has become a identifiable noun in English for a boy who is always on the make. I’m not sure kindergarten kids would make the association but it will be hard for this child as he grows up through high school.

M: I am a fan of Cardi B., but not a fan of her baby naming. She and her partner Offset named their baby girl Kulture Kiari Cephus. I love Kiari, however, so instead of being higher on the list, Kulture comes in at #7.

J: As we discussed in our podcast, a “culture” to me is something in a petri dish. A biological sample. It sounds gross and putting that K on it makes it more disgusting. Sorry, this one would be number one on my NO list!

M: On the naughty list is Kat von D. and Leafar Sayer’s baby son, Leafar Von D. Reyes. I have a particular problem with this name because it is Rafael backwards. I love the name Rafael so why not just name a baby that? No reason to make the baby sound like an 80s hair metal band!

M: Josh Brolin and wife Kathryn have named their daughter Westlyn Reign. There is nothing I like about this name. It sounds like a weather pattern at best and a horse dressage at worst. I wish they would have picked something more befitting the classy grandma, Barbra!

J: I disagree on this one. Westlyn is not a terrible name, although I prefer the homophonous name Rain as opposed to Reign. What are you trying to prove with the word-name Reign? That’s as bad as naming your child Princess or King.

M: What we don’t love is the name of Pete Wentz and Meagan Camper’s baby girl Marvel Jane Wentz. How long do you think it will take her to drop the name Marvel and just go by Jane Wentz? We’re thinking grade school.

J: I really want to hate the name Marvel but can’t think of a reason why. Maybe because of the comic book publisher and all the attention that it’s received in the last 5 to 10 years. Marvelle and Marvella have been old Southern names, so why not Marvel?

M: I think the Kardashians just tried to outdo themselves by being wackier than the next one and see who could get the most publicity for most outrageous name of 2018. Well, I couldn’t decide, so they all win the award by keeping it in the family.  True Thompson, Stormi Scott, and Chicago West. 3-2-1, bam!

J: I think Chicago is a great name, but pairing it with the surname West is just silly. Then again, people name their kids Bronx and Brooklyn after neighborhoods. I would take True Thompson off this list because I think it’s beautiful. Stormi Scott on the other hand is a terrible expectation name. Very negative. I know, I know, True is also an expectation name, but at least it’s a positive one!

M: It should come to no surprise to anyone that Louis Arthur Charles, the son of Prince William and Kate Middleton, made the list. I love the way Louis is pronounced (the French style Lou-ee) in particular. We are eagerly awaiting Meagan and Harry’s baby naming to see who is the best royal baby namer in England!

J: I’m not particularly a fan of Louis, although I do love Louis Armstrong. I think it sounds very diminutive like a child’s name and he’s not going to be a child prince forever!

M: Kate Hudson and boyfriend Danny Fujikawa came up with their daughter’s baby name to honor Danny’s father: Rani Rose. Rani is pronounced “Ronnie.” I like the alliteration of this name plus the interesting take on the spelling.

J: I think people will say Ranny, rhymes with Annie. Sorry, but not one of my favorite names. I would rather they had given her a longer name like Ranya or Miranda, with Rani as a nick name.

M: Just like his father shoots like a canon across the basketball court, Canon W. Jack Curry was named by parents Steph and Ayesha Curry. We like the strength and tough-guy-ness of Canon but aren’t quite a fan of just the initial middle name of W. What does it stand for, anyway?

J: I would venture to guess it stands for Wardell which is Steph’s real first name! Ayesha says that they picked the name Canon on their honeymoon in France. Since it is such a recognizable brand name I would have chosen another French name – there are so many great French names to choose from, why choose one that reminds one of a printer? I do love alliterative names, though, and Canon Curry sounds pretty important.

M: Lady Antebellum’s Hillary Scott and husband Chris Tyrell had twin baby girls and named them Betsy Mack and Emory JoAnn. Although I am neutral on the name Emory JoAnn, I love the name Betsy Mack, as we think it’s both sweet and tough at the same time.

J: I prefer the opposite: I love the name Emory, but Betsy is a nickname. Name her Elizabeth with Betsy as a nickname and give her the choice! Anyway, Betsy Mack sounds like a truck driver.

M: Next on my list is Jessica Alba and Cash Warren’s baby boy: Hayes. We think that it has a retro sound to it from the 1970s but feel it can make a come back in the 2020s. We can only watch and wait to see if this is true!

J: Weren’t Hayes and Warren both commissions? Yes, The Hays Commission came up with the “moral guidelines” and censorship for motion pictures. The Warren commission was in charge of determining who shot President Kennedy. That being said, Hayes Warren is a fine name and sounds like a politician. A little difficult to say out loud because of the soft consonants S and W overlapping, but not a bad name.

M: Stanley Tucci and his wife Felicity Blunt have a knack for picking out some of the prettiest names. This time around, they went with the popular Emilia followed by middle name Giovanna. We wonder if they got the name from Emilia Clarke from Game of Thrones fame or if they just chose it because of it being a beautiful Italian name. Only they know the truth!

J: Amelia with both spellings, A and E, is number one on our charts and therefore already overused. But Emilia Tucci has such a beautiful cadence that I cannot deny this is one of the best celebrity baby names of the year.

M: Robin Thicke and wife April Love Geary came in with a simple but pretty name for number 4 best name of 2018. Mia Love Thicke is the baby’s name and we simply love it, pun purely intended.

J: Totally disagree on this one. Mia Thicke sounds like “me-a-thick.” If she is just a couple pounds overweight, this opens her up to getting brutally teased. Putting Love as the middle name does not change this horrible pun. Is it supposed to be “me a love sick?” Whether it was intentional or not, this goes on my bad list!

M: Along with my number two choice, Giulietta, Genevieve is a unique but not crazy name chosen by Kate Upton and Justin Verlander for their 2018 baby.

J: it certainly is unique! Lots of Vs up in there. If you do the baby names introduction test and say aloud,  “Hello my name is Genevieve Verlander” it is quite a mouthful! The last V in Genevieve morphs into the first V in Verlander. But I love the name Genevieve, with both the English pronunciation, JENN-eh-veev, and the French pronunciation, zjan-vee-EHV.

M: In my opinion, the top celebrity baby name of the year award goes to Michael Phelps and Nicole Johnson, whose baby naming has much improved over their last boy’s name of Boomer. This time around they won the gold with baby name Beckett. Congratulations!

J: I like the name Beckett because it is a literary name (Samuel Beckett)! Beckett Phelps is memorable because of the triple -eh sound. It also follows the popular trend of using last names for first names, especially on the boys side of the charts.  Definitely better than Boomer! But my first choice is…

M: Kaavia James is the baby daughter of actress Gabrielle Union and husband, Dwyane Wade. I like the name because it’s a unique alternative to all the other K names out there. Although it has elements of other names like Kaylee and Ava, it’s a completely individual name on its own.

J: Exactly! The name is very lyrical, and I even like the crossover name James for a girl! Kaavia is an east Indian name meaning poetic and creative. It is another name for the goddess Saraswati. I predict that parents will follow Gabrielle and Dwayne’s lead and use this name for their babies, too. Look for some more  Kaavias in the next year!

Well that’s it, folks. We are happy that you joined us for a year of 2018 baby name celebrations, foils, and failures. We will be with you in 2019 to stay up on the news of new babies and celebrity pregnancy, births, and naming–so stay tuned!

Baby Names Tip: Don't give your child a nickname (i.e. "Jimmy") as a given name on their birth certificate. Let them have the flexibility to choose. Remember, you're not just naming a baby, you're also naming an adult!
More Baby Names Tips

Catch up with the Baby Names Podcast